Before we begin our discussion on Motion in two dimensions (2D), let us answer these 3 questions.

(If you need an Online Physics Tutor to explain these concepts in a private 1:1 mode, feel free and get started immediately on WhatsApp !)

The motion of a particle in a plane is called 2-dimensional motion.

Example: An insect crawling on your laptop or mobile screen but not flying above it.

Can there be motion in 2 dimensions (2D)?

Yes! Motion in two dimensions is possible. It is pretty common to have 2-dimensional motion.

How do we tackle the motion in 2D?

Break the motion into two separate components, x, and y, and treat each component as a separate motion. But since it is a motion of a single object so, at one time, the body can only be in one place. Using this constraint, we can correlate the two separate equations and solve them for unknowns.

Why does this strategy work?

The concept of motion, when a particle moves along a straight line, can be used for motion in a plane. When the motion of a particle is in-plane, we generally consider the plane of motion as the x-y plane. We choose the origin at the place from where the motion starts, and then we consider motion along any two convenient mutually perpendicular directions as one-dimensional motion. Motion in two perpendicular directions is chosen as the x and y-axes. 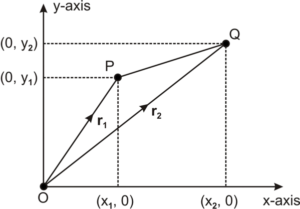 the position vector changes from to

from the triangle rule of vector addition, we can write

So we see here that motion in an x-y plane can be simplified into two separate motions; one in the x-direction and one in the y-direction. Hence the strategy that we discussed to tackle the 2D motion works.

We define the particle’s average velocity during the time interval as the ratios of the displacement of that time interval.

Because is normally assumed as constant, its component and are also constants. Therefore we can apply the kinematics equations to the x and y components of the velocity vector and displacement vector as follows. 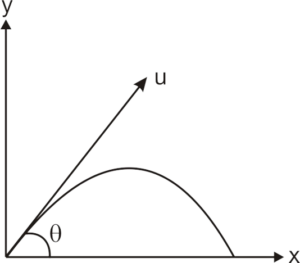 So, the equation of kinematics for one-dimensional motion can be used.

Circular motion is a type of motion in a plane in which a particle moves around a fixed point such that its distance from a fixed point is constant.

Suppose a particle moves on a circular path uniformly, as shown in the figure. 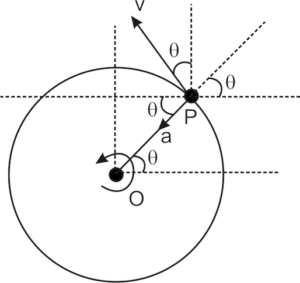 Here, R is the distance from the fixed point, the center of this circle, to the particle.

Click the link for an in-depth guide on circular motion.

Watch this video about

A helicopter on a flood relief mission flying horizontally with speed u at an altitude H has to drop a food packet for a victim standing on the ground. At what distance from the victim should the packet be dropped? The victim stands in the vertical plane of the helicopter’s motion.

We can solve this problem by using the concept involved in motion in a plane.

The motion of the food packet along the y-axis.

Again, the motion of the food packet along the x-axis,

Therefore, the required distance equal to .

A projectile is given an initial velocity of m/s where is along the ground and is along the vertical of then find equation of trajectory.

This problem is based on the concept of motion in a plane.

We can study the two-dimensional motion as one-dimensional along the x-axis and y-axis since its superposition gives the resultant motion.

Using motion of the projectile along x-axis,

Again, using motion of the projectile along y-axis,

Putting the value of t = x in the above equation

This is the required equation of trajectory.

The particle has initial velocity and an acceleration of . Find speed of particle after 10 sec.

Here, in this question, it is given that

Since the acceleration of the particle is constant so, we can use