When we throw an object high up in the air, the object is called a projectile, and the path it follows is called its trajectory. Once the object is released, it no longer experiences the initial force but comes under the influence of gravity and the air drag (or friction). However, in this article, we will ignore the effects of air resistance to keep things simple. A few simple examples of projectile motion are throwing a stone (at some angle from the horizon or straight overhead), dropping a stone into a ditch, launching a satellite into Earth orbit, or sending interplanetary probes.

My Engineering Buddy provides the #1 online physics tutoring service on the web. In case you need one, feel free to WhatsApp us.

Before we proceed further, we assume that you are familiar with the three equations of motion, namely,

where  is the initial velocity, is the final velocity,  is the acceleration, and is the flight time.

Let us draw a diagram to understand the physics of the projectile motion. Assume the object’s initial velocity is , and it is projected at an angle from the horizon. Also, assume that it attains a maximum height of and then starts falling down and finally touches the ground at point R units away from the throwing point. 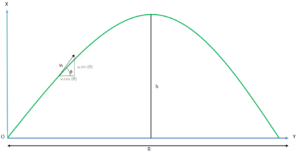 Figure 1. The motion of an object thrown up from the ground at an angle.

The velocity of the particle seconds after its projection is labeled as . It is directed at degrees from the horizon. It has and as the horizontal and vertical components.

Let us say at , . Further, let the initial projection direction to the ground (horizon) be represented as for simplicity. We label it as . We divide the initial velocity into horizontal and vertical components, and . The projected object experiences only one force on it, the gravitational pull downwards, which produces acceleration that is acting against the vertical component of projection velocity and hence decelerates the object until its vertical velocity becomes . At that point, the object attains height above the horizon and starts falling. However, all the while, the horizontal component of the velocity finds no resistance (as gravity is acting at a right angle to it, we have ignored any effects of air resistance in our calculation). Let be the time the object takes to reach the maximum height .

Following the formula [A], .

This was the calculation for the part the object was traveling up. For the descent, the initial velocity’s vertical component is zero, there is acceleration which is now bringing it down, the horizontal component is undisturbed with value  and another known quantity is the distance to be traveled before the object touches ground . Let  be the time the object takes to fall from the top point while traversing the distance to the ground . Now, using the equation [B],

We know that ;  from relation [5] above we conclude that the maximum range would be attained by the projectile if it is thrown at an angle of  from the horizon.

What is the position of the object at time after the launch? It is equal to the the velocity multiplied by time in case of uniform speed and in case of acceleration it is given by equation of motion [B].

which is of the form,

– the standard equation of a parabola.

When we trace it, it clearly shows that it is a parabola. Please give some other values to and experiment. 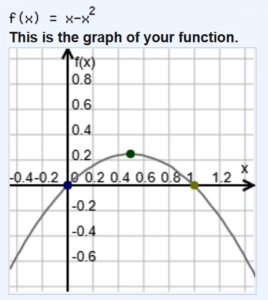 However, a projectile need not be thrown up from and land on the ground (the zeroth item in the list below). There can be other situations.

An object is dropped from a height. 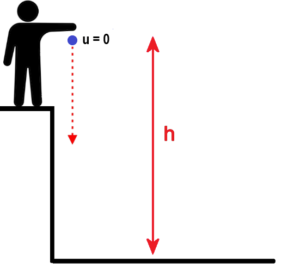 Figure 3. An object is dropped from a height.

So, the time to fall to the ground is .

The speed with which the object hits the ground is given by the formula [C] and is .

What if the object is thrown vertically upwards with speed u and reaches height h? 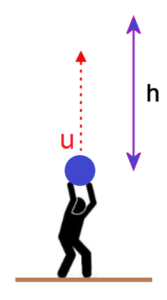 The object slows down when its speed , hence equation [C] becomes, , we get the maximum height reached, and the time taken in doing so from relation [A], ( and are directed oppositely), we get and the total time from throwing up to falling back to the launch height .