In Mathematics, we do our calculations using some numbers, and the result is another number. In Physics, Chemistry, Engineering Sciences, or even Biological Sciences, we take measurements, do calculations and end up with some results. Most of the time, these results are some numbers. Sometimes these numbers are small, sometimes massive, and sometimes have some fractional part represented by a string of numbers after the decimal point. We often encounter a problem here ‘to how many decimal places should I report the answer?’ It is precisely where the concept of ‘significant figures‘ comes into play.

If you wish to recapitulate your number system knowledge, you may click this link.

A good example of significant figures is the natural number π (pi). As we all know, it is the ratio of the circumference of a circle to its diameter. No matter how big or small you draw a circle; this ratio is always the same, a natural constant. For thousands of years, humankind has tried to evaluate this constant precisely. It is a transcendental number, and we cannot calculate it using an equation involving only sums, products, powers, and integers. It is an irrational number; thus, we cannot represent it as a ratio of two integers. Its earliest value for most applications is the approximation 22/7, a rational number, and it gives the value of π correct to only 2 decimal places, 3.14.

A better approximation is 355/113; it gives a correct value down to the decimal’s sixth place as 3.141592. A better one is 104348/33215, which correctly approximates up to 9 decimal places, 3.141592653. Using modern computers, the value π has been evaluated accurately to millions of places after the decimal. On 14 August 2021, a team at the University of Applied Sciences of the Grisons in Switzerland announced their completion of the computation of π to 62.8 trillion digits. Mind-boggling and useless for us for any practical purpose! The question is, how precise a value π do we require? For most practical applications in science, a value of π = 3.14159, up to only 5 decimal places, is sufficient.

Imagine you have a cemented circular platform in your garden and wish to enhance its appearance with porcelain tiles. You take a tape measure and find that its diameter is 4 meters (that is as accurate as you can measure with a tape measure), meaning it has a radius of 2 meters. The question is how many tiles would be required to cover the platform. The tiles supplied by the manufacturer are squares of 12 inches by 12 inches (it says so, on the packing box). It is a case of simple arithmetic; the area of the circular platform is (π r2) = π x 2 x 2 = 4 π m2. The area of the tiles is 12 x 12 or 144 inch2. We have to bring them to the same units before we take the next step of dividing the platform area by tile area.

All non-zero digits of a number are significant.

All leading zeroes of a number are insignificant.

If someone reports that the length of a pole is 017 feet, he means it is 17 feet, the leading zero is insignificant, and there are just 2 significant digits in the number 017.

Trailing zeroes of a number are insignificant.

What if zeroes occur between non-zero digits of a number?

Well, then they are all significant. For example, 24030507 is an 8-digit number, and all the 8, including the three zeroes, are significant – necessary to represent the value of the number.

The story gets a twist when the decimal point comes in.

Take the above example of 2500; if we had written it as ‘2500, ‘ all the 4 digits would have been significant. Why? The decimal indicates that the measurement was precise enough to go to the fractional level, but the result was a whole number without anything after the decimal.

It may seem very peculiar, but 0.025 also has only 2 significant digits by definition. The rule is that the zeros on the right of the decimal point and to the left of a non-zero digit are insignificant. Thus, 0.00645 has only three significant digits. What are the implications, and why is it so? Imagine you are measuring the length of a short, newly constructed patch of road. Your surveyor reports its length as 0.0486 km, which is the same as 48.6 meters. Thus, only 3 digits are significant, 4, 8, and 6.

However, if the reported result was 0.04860 km, the number of significant digits becomes 4, and the last zero is significant. Why? The rule is that all zeros on the right of a decimal point are significant only if a non-zero digit does not follow them. For example, 20.00 contains four significant digits. In our example, it means the length of the patch of road is 48.60 meters, the person was trying to measure it correctly down to the last centimeter, but that last centimeter turned out to be zero.

(the digits in bold are significant figures)

As a general rule, significant figures of a number are any non-zero digits or trapped zeros, and they do not include leading or trailing zeros.

Significant figures in multiplication or division

Significant figures in addition and subtraction

Significant figures when changing from decimal to scientific notation

When changing from decimal to scientific notation, we should maintain the same number of significant figures.

Significant figures in Logarithm and Antilogarithm

The normalized number was 700000 (6 significant digits), so the decimal part of the answer should have the same number of figures.

The same rule applies while taking the antilogarithm.

How to know how many significant figures to use?

From the previous section, one should not conclude that we can truncate the numbers in the various calculation steps. Use a reasonable number of decimal places during the calculation steps and do the rounding off only when you have arrived at the final result.

We did not compromise on decimal places in the intermediate stage.

Many people wonder if the treatment of significant figures would be different when doing mathematics, physics, or chemistry problems. In all these calculations, the underlying operation is some mathematics; hence the rules of the game remain the same.

Several Resources on Significant Figures are freely available on the internet. Some great people have put their knowledge, thoughts, and work there for all to use.

It is easy to use. Here is a snapshot of the calculator: 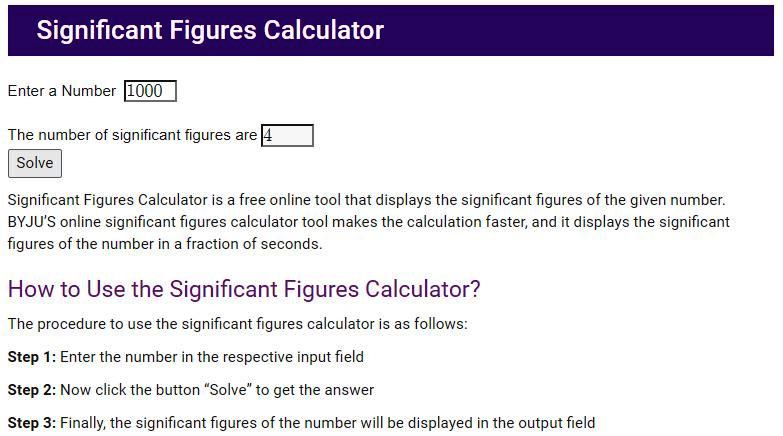 (Note: It uses javascript coding to calculate the significant figures. It is pretty easy to use. However, I could find a bug in it. I put the number ‘1000’ in the input field, and upon pressing Solve, I get ‘4’ as a result, which is wrong and as also by definition given by Byju’s themselves; see the highlighted part below:

The answer should have been ‘1’. Upon reading further, I found a disclaimer under the SFC.

“This calculator development is in progress some of the inputs might not work, Sorry for the inconvenience.”

Our advice: use it carefully at your peril, or do not use it until they withdraw the disclaimer.

The most remarkable among others is the Omni Calculator (https://www.omnicalculator.com/math/sig-fig). It works ‘on-the-fly’; even as you start inputting the digits of a number, its significant figures and other relevant information begin to display. Here is a snapshot. 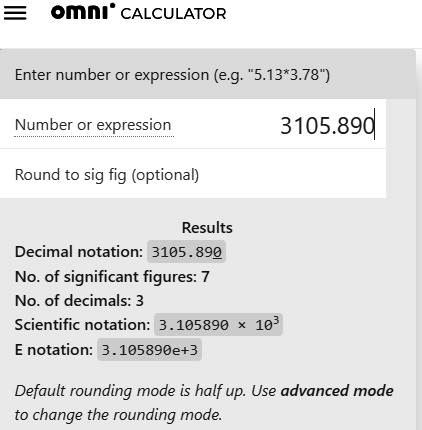 Last but not least, Khan Academy’s video on significant figures,