The law of Conservation of Linear Momentum

Home » The law of Conservation of Linear Momentum

The law of conservation of  momentum is divided into two parts:

In this article, we will learn about the law of conservation of LINEAR momentum.

If you want to learn Physics from an online Physics tutor, feel free to contact us on WhatsApp.

The Law of conservation of linear momentum

The law of conservation of linear momentum says that when the resultant external force acting on a system is zero, the system’s total momentum (vector sum) remains constant.

Explosions, the disintegration of nuclei, recoil of a gun, collisions, etc., can be explained using the law of conservation of linear momentum.

The recoil of the gun is one of the best daily life examples.

In this example, when a shot is fired from the gun, while the shot moves forwards, the gun moves backward. This motion of the gun is called recoil of the gun. When a gun of mass M fires a bullet of mass m with a muzzle velocity v, then the gun recoils with a velocity V given by .

As we know, from Newton’s 2nd law of motion, the rate of change of momentum of a body is directly proportional to the resultant (or) net external force acting on the body and taking place along the direction of the force.

Mathematically we can write,

Hence, the system’s total momentum will not change with respect to time. This will remain constant.

As we know, the angular momentum of body is defined as,

Now, differentiating with respect to time,

Here, is the total force acting on the ith particle.

This includes any external force as well as the forces on the ith particle by all the other particles. Taking summation of both sides, internal torque adds to zero.

Here, is the total torque due to all the external forces acting on the system.

Problem 1: A person jumping on a moving car

A car of mass M is moving with uniform velocity v on a horizontal road when a person drops himself on it from above. Taking mass of person to be m; What will be the car’s velocity after the event?

Ans.: Consider the car plus the person as a system. In the horizontal direction, there is no external force since the momentum of that person is equal to zero.

Initially, the horizontal momentum of the system = MV.

Finally, the person sticks to the car’s roof, so they move with equal velocity V.

Now, from the principle of conservation of angular momentum,

Problem 2: Force of recoil of a machine gun

The hero of a stunt film fires bullets from a machine gun, each at a speed of 1km/s. If he fires 20 bullets in 4 seconds, what average force does he exert against the machine gun during this period?

Ans.: The momentum of each bullet,

The gun is imparted this much momentum by each bullet fired. So, the rate of change of momentum of the gun (total)

Mr. John (50 kg) and Mr. Alex (60 kg) are sitting at the two extremes of a 4m long boat (40kg) still in the water. They come to the middle of the boat to discuss a mechanical problem. Neglecting friction with water, how far does the boat move on the water during the process? 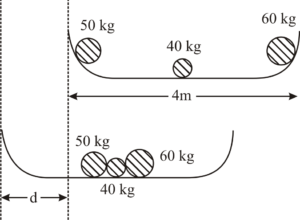 Let the boat moves along the –ve x-axis by a distance as they approach the middle of the boat.

Hence, boat will move along +ve x-direction by a distance of or .

A marble going at a speed of 2 m/s hits another marble of equal mass at rest. If the collision is perfectly elastic, then find the velocity of the first marble after the collision.

Ans. : Assuming both marbles as a system,

Let speeds of marbles becomes and after the collision.

Here along x-axis equals to zero.

Also, in this case, we can write,

So, the final velocity of the first marble will be zero.

Problem 5: Falling off a vertical pen on a frictionless surface

Ans. : Since the given pen is slightly rotated, the velocity of the center of mass along the x-axis is equal to zero. Hence, position of centre of mass pen will be constant. 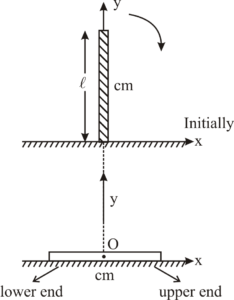 Hence, the lower end will be at a distance left with respect to the point O when the pen becomes horizontal on the surface.