Torque is the turning effect of force about a fixed point. It is also called the Moment of force. 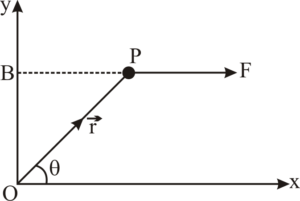 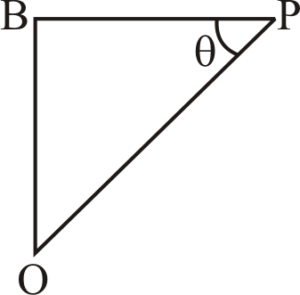 Torque of force F about the point O

Some quick facts on torque

A force of a given magnitude applied at right angles to the door at its outer edge is most effective in producing rotation.

The moment of a force vanishes if either the magnitude of the force is zero or if the line of action of the force passes through the fixed point.

Ex-1: A simple pendulum of length l is pulled aside to make an angle q with the vertical. Find the magnitude of the torque of the weight W of the bob about the point of suspension.

Ans. From figure, torque of weight W about point O, 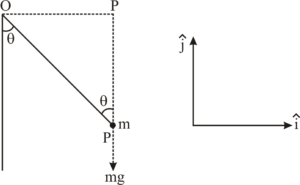 Therefore, the magnitude of torque of weight W about the point of suspension is

Ex-2: A cubical block of mass m and edge a slides down a rough inclined plane of inclination q with a uniform speed. Find the torque of the normal force acting on the block about its center.

Ans. Since block is sliding with constant speed 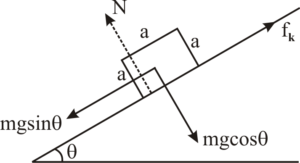 Again, cubical block has no any angular acceleration

Ex-3: If and, then find torque of force F about the origin.

So, torque of force F about the origin .

A pair of equal and opposite forces with different lines of action is known as a couple. A couple produces rotation without translation. If an object is not on a pivot, a couple causes it to rotate about its center of mass.

= moment of couple = Magnitude of either force X perpendicular distance between the forces.

Mechanical equilibrium of a rigid body

A rigid body is said to be in mechanical equilibrium if its linear and angular momentum do not change with time or, equivalently, the body has neither linear nor angular acceleration.

The vector sum of the forces on a rigid body is zero.

If the total force on the body is zero, then the total linear momentum of the body does not change with time;

The vector sum of all the torques on the rigid body is zero,

If the total torque on the rigid body is zero, the total angular momentum of the body does not change with time.

The rotational equilibrium condition is independent of the location of the origin about which the torques are taken.

Ex.:- An uniform meter stick of 200g is suspended from the ceiling through two identical strings of equal length fixed at the ends. A small object of mass of 20 grams is placed on the stick at a distance of 70 cm from the left end. Find tensions in two strings.

Ans.-Since the system is in equilibrium, so for translational equilibrium 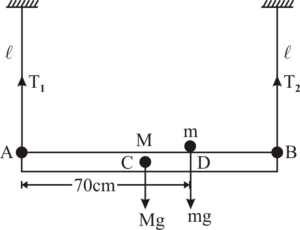 Again, the system has no angular acceleration;

Now, putting this value of into equation (i), we obtain .