The animation below shows an object moving at a constant speed on a circular path. It is an example of Uniform Circular Motion as the object’s speed is constant. However, the direction of motion (along the tangent drawn at the point where the object is located at a particular moment) changes all the time, thus the velocity. We know the rate of change of velocity is called acceleration.

In the animation above, the velocity is indicated by vector v (along the tangent), while the acceleration a is directed toward the center of motion.

If you are looking for a private 1:1 online tutoring session with an excellent Physics Tutor, feel free to contact us on WhatsApp, or else, please keep reading further.

What is Circular motion?

If a point or an object moves along a circular path, its motion is called circular motion.

Let us first see why a force is needed for the circular motion to occur.

It becomes interesting to see this definition in the light of Newton’s First Law of Motion, which  says, “An object at rest stays at rest, and an object in motion stays in motion with the same speed and the same direction unless acted upon; by an unbalanced force.”

Thus, we can deduce that some force must be present for a circular motion to occur.

The phrase ‘unbalanced force’ sounds peculiar, yet it is present all around us without realizing its significance. Think of a book kept on a table. The book is at rest. However, gravity acts vertically downwards, which gets ‘balanced’ by an equal and opposite force acting on it by the table – normal force (also called reaction, recall Newton’s third law of motion). One must apply a force to overcome the friction if one tries to slide the book along the table’s surface. This would now be called the case of ‘unbalanced’ force.

The preceding assumes that the motion occurs in an ideal state or space where no other forces exist. Therefore, the orientation of the circle where the motion is taking place does not matter, and it would be immaterial whether it is oriented horizontally or vertically. However, a little probing reveals the fallacy of this argument. The words ‘vertical’ or ‘horizontal’ presage the presence of gravity; we define vertical direction by suspending a bob from a string; the string is said to be vertically oriented. The plane perpendicular to this direction is the horizon, and any object moving in this plane is moving horizontally.

Similarly, we can conceive planes perpendicular to this horizontal plane; they are all vertical. Therefore, in a real-world situation, the treatment of circular motion gets modified by gravity. Let us try to explore it further with an example.

Take the case of a ball tied to a string, and you revolve it in a horizontal circle by giving small tugs of force in each revolution. 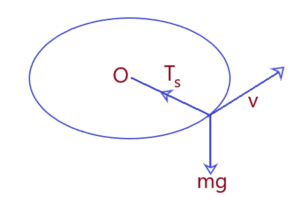 Consider an object of mass tied at one end of a string and moving in a horizontal circle of radius with a center at . The object is moving with a uniform linear velocity  and angular velocity . The weight of the object is acting vertically downwards. It is thus at right angles to the tension in the string. The force toward the center is:

Thus the tension in the string is equal to the centripetal force.

However, how did we conclude that centripetal acceleration (centripetal means center seeking or acting toward the center) should be equal to or ? In most cases, you will find this term suddenly appearing as it is. It is not some gospel truth. Shouldn’t a curious mind like yours try to derive it? Let me help you out. Please look at the construction below. 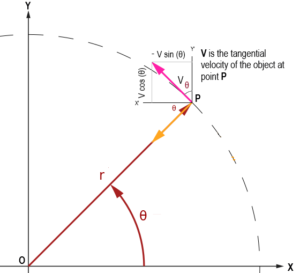 is the origin of the cartesian frame of reference, having axes as and . An object is moving such that it maintains a constant distance from the point , which means it performs the circular motion. It moves uniformly with magnitude on the circle with . It is making one complete revolution in seconds.

We can find out a few simple relationships. The distance traveled in time T is the circumference of the circle; thus, speed is given by:

Likewise, angular speed can be computed by dividing the total angle (=3600) by the time taken ().

Upon eliminating from equations [1] and [2] we get,

While the speed is uniform, the velocity (speed in a particular direction) is not so. It is a vector changing its direction at every point of the circle. The velocity has horizontal and vertical components. Please pay attention to the construction around point in the above diagram.

Let us pull a small segment of figure 3 here.

Recall the simple geometry you had learned, the alternate and complementary angles, and the line OP is inclined at angle to the -axis. Using a polar coordinate system (based on the angle around a pole), we can compute the horizontal  and vertical components of the velocity at .

Now is the turn to calculate the x and y components of the centripetal acceleration. Acceleration is the rate of change in velocity.

Acceleration . From the above expressions we get,

By using the relation [3] above, we can write,

You may also refer to the Khan Academy Video for the above and other derivations at this link.

In a uniform circular motion, the particle’s speed and tension in the string tied to a bob remain constant. The velocity, which has the same magnitude as speed, keeps changing as the direction of the tangent drawn at the particle continuously changes.

Non-uniform circular motion is the motion of an object whose speed varies from point to point and does not cover the same distance in equal time intervals. This is irrespective of the time per cycle, which may be constant. In such a case, the particle has tangential and centripetal acceleration.

An example of a non-uniform circular motion is when you make a ball tied to a string move on a vertical circle, as shown in the illustration below. 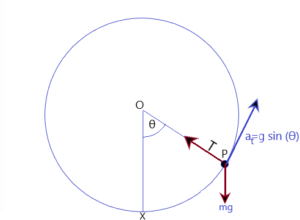 In the illustration above, – our baseline – is vertical, and the turning angle is . The weight  is acting vertically downwards. The acceleration, in this case, has two components, tangential and centripetal; both change with time. While the tangential acceleration is , the centripetal one is the string’s tension due to circular motion plus the gravity’s radial component () getting added vectorially to the string tension or the centripetal force.

Consider two unique situations; one at the bottom point where . Thus . Therefore the contribution of gravity to the tangential component is zero. The other point is at the top; here, is 1800, and . So the tangential component in both the cases is zero. The tension is thus maximum at the bottom (), whereas it is the lowest at the top (). It varies cyclically between these two extreme values.

Consider two cases; a block of wood sitting at rest on a table and another on a ramp. See below on the right the free body version of the diagrams on the left.

Fig 5: Free body diagram of an object resting on a table.

Here is the gravitational force, and is the normal (also called reaction) from the table. 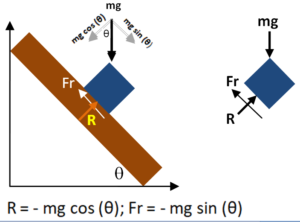 Fig 6: Free body diagram of an object resting on a ramp.

Here is the frictional force, is the normal (force of reaction) from the ramp, and is the gravitational force. 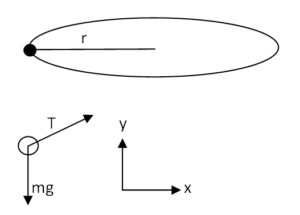 Radial and tangential accelerations in a uniform circular motion

From the above discussions, we can summarize that the radial acceleration and the tangential acceleration is 0. Even though the velocity changes continuously, it changes only its direction and not magnitude. 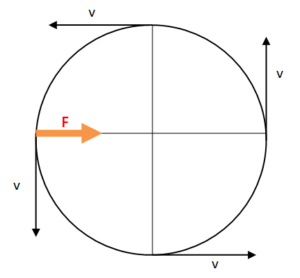 In the above 3 situations, the velocity is tangential to the circle. Hence, the resultant force and the acceleration are directed towards the center.

We have noted that in a circular motion, the direction of motion is tangential and constantly changing, but the speed is constant.

The force required to accelerate or change the object’s velocity is always towards the center and perpendicular to the motion.

The centripetal force vector is always perpendicular to the instantaneous velocity vector and does not produce any work. This means that the total mechanical energy of the particle remains constant.

The following GIF, courtesy of Kaiserscience, beautifully displays it.

The one-dimensional projection of a ball moving on a vertical circle onto the x-axis visualizes a linear simple harmonic motion effect.

The circle is a class of ellipses with its eccentricity as zero. The word eccentricity in science means a departure from being a perfect circle. In cartesian geometry, the formula of an ellipse is given by:

where and are the semi-major and semi-minor axes of the ellipse. Without going into the definition of an ellipse, we write here the formula for eccentricity, ,