Vectors are part of everyday life. When any person gives you directions, he may say something like; the school is 3 km that way and point. He gives you both a magnitude (a measurement) and a direction (by pointing). Vectors in Physics is an essential concept that one must master.

Plenty of situations in our life display vectors, and plenty of ideas in physics are vectors, too, for example, velocity, acceleration, and force, displacement. Vectors are fundamental.

Before we talk about vectors, let us talk about Physical Quantities first.

The quantities that are measurable are called physical quantities. Ex. Length, mass, time, velocity. These quantities can be vectors, scalars, or tensors.

Vectors are those which have both magnitude and direction and also obey laws of vector addition.

Scalars are those which have only magnitude.

Note: a physical quantity having magnitude and direction but not obeying the law of vector addition is treated as a scalar. Ex: Electric current is a scalar quantity.

Electric current is always associated with direction, but it is not a vector quantity. It does not obey the law of vector addition. 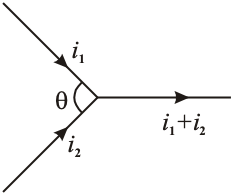 The resultant of i1 and i2 is (i1 + i2) by Kirchoff’s current law. The resultant does not depend on the angle between currents i1 and i2.

Tensors are those quantities having different magnitudes in different directions. These do not obey the laws of vector addition.

Directions and magnitude of a vector :

When we have a vector, we must keep in mind two quantities: its direction and magnitude.

We see vectors drawn as arrows in physics, which is perfect because an arrow has both a clear direction and a clear magnitude (the length of the arrow)

The arrow represents a vector that starts at the foot and ends at the head.

In physics, we use A to represent a vector. In some books, we see it with an arrow on top A. The arrow means that this is not only a scalar value which would be represented by A but also something with direction.

Why are vectors important?

Vectors are used in many branches of physics whenever there are quantities that we must describe in both magnitude and direction.

Vectors are used in many areas. E.g.:

The laws of electromagnetism and Maxwell’s equations are expressed in terms of vectors and vector field concepts. Vector operators such as the Gradient, divergence, and curl are often used in physics. Operations such as cross product and the dot product have many examples in physics. The cross product describes the Lorentz force, and mechanical work is expressed as the dot product of displacement and force vectors.

There is no division of vectors. Why?

Vectors are quantities with magnitudes as well as direction. Dividing a vector by another vector means we are dividing a direction by another direction, just like if we divide east by west. This does not make sense.

What is the triangle law of vector addition? 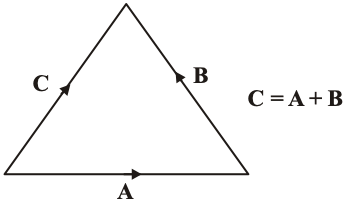 C is also known as the resultant vector.

The parallelogram rule of vector addition says that if two vectors are assumed to be the adjacent sides of a parallelogram, then the resultant of these two vectors is given by the vector that is diagonal, passing through the contact point of two vectors (tail to tail).

C is also called the resultant of a and b.

Let A and B be the two vectors to be added. A diagram is drawn in which the starting point of B coincides with the ending point of A. Here (A + B) is the resultant of A and B (triangle rule of vector addition).

Now, the same rule can be stated in a slightly different way. We draw the vectors A and B with both starting points coinciding, considering these two vectors as the adjacent sides. We complete parallelogram. The diagonal through the common tails give the sum of two vectors.

We are interested in calculating the magnitude and direction of (A + B).

Let the angle between A and B is . 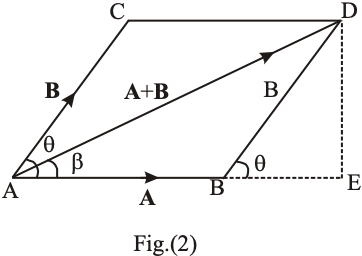 The angle made by the resultant vector with A can be found from the right angle triangle AED.

Multiplication of a vector by a number :

If C is positive, the direction of the vector B = CA is the same as that of A.

Multiplication by (–1) inverts the direction of the vector. The vectors A and –A have equal magnitudes but opposite directions.

Let A and B be two co-initial vectors, as shown in the figure. 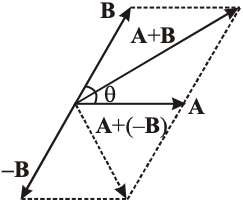 It is a vector whose magnitude is unity. A unit vector parallel to a given vector R is given by, .

represents the sense of direction of the vector R.

A unit vector is a dimensionless physical quantity. 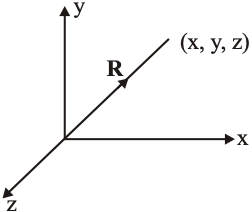 The unit vector along can be written as

Here, R is the given vector, and |R| is the magnitude of that vector.

, , and are orthogonal unit vectors.

is known as a unit vector along the x-axis.

is known as a unit vector along the y-axis.

is known as a unit vector along the z-axis.

It is a vector of zero magnitude.

Its direction is indeterminate.

It is represented as O.

It is a vector that represents the position of a particle with respect to the origin of a coordinate system. The position vector of a point (x, y, z) can be written in the form:

Resolution of a vector : 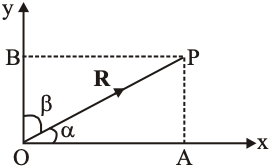 According to the parallelogram rule of vector addition

Definition of Resolution of a vector :

Splitting up a single vector into two or more vectors is known as the resolution of a vector.

If the vector R is not in the x-y plane, this may have non-zero projections along the x, y & z-axis. Therefore, we can resolve this into three parts (along the x-axis, y-axis, and z-axis).

If be the angles made by vector R with x, y and z axis respectively, then we can write

are unit vectors along x-axis, y-axis and z-axis respectively.

The value is called a component of R along the x-axis.

The value is called a component of R along the y-axis.

The value is called a component of R along the z-axis.

The polar form of vector :

When we know a point in Cartesian coordinate (X, Y) and want it in polar coordinates , we solve a right angle triangle with two known sides.

Suppose, there is a point in x-y plane. 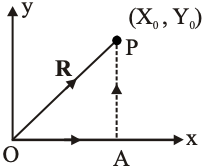 From the triangle rule of vector addition,

We call OP length as r, from given triangle POA,

So, the vector representation.

is in polar form vector

We can write this as

Polar form of a vector.

A vector multiplied by another vector may give a scalar or a vector. Hence there are two types of products for the multiplication of two vectors.

The scalar product of two vectors A and B is given by, where is the smaller angle between A & B.

(i) Scalar product is commutative i.e.,

(iii) It does not obey associative law i.e., we can not write

Scalar product of two parallel vectors is maximum if

The scalar product of two perpendicular vectors is zero.