What is Work Done in Physics?

Work done in Physics is entirely different from our usual understanding of day-to-day work like working in an office, doing workouts, etc.

Work done in physics should be taken more as a scientific/physical definition rather than correlating it with real life. Although many similarities exist, strictly speaking, these are different.

Continue reading further or contact us on WhatsApp to get an Online Physics Tutor who can explain to you the relevant concepts better.

To better understand work done in Physics, let us see its formula.

Here, is the angle between F and S.

Only the component of F along S that is contributes to the work done. Strictly speaking, the work is done by the source or agent that applies the force.

To understand it better, let us calculate the work done in the below examples.

If we lift a body from rest to a height h, then Work done by lifting force F

Again, work done by the force of gravity mg.

If a body is pulled on a rough horizontal surface through a displacement S. 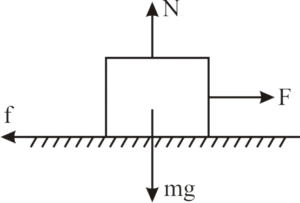 How is the physics definition of work done different from what people usually think about work?

Suppose a person a holding a box of mass m on his head for some time (say for two hours). Here, forces acting on the box are (i) mg force along the vertically downward direction and (ii) normal reaction force exerted by his head along the vertically upward direction. But the displacement of the points of application of forces is zero. So, according to the definition of work done in physics, work done by forces equals zero. One can say that the person holding a box on his head is doing work in daily life.

There are three approaches to calculating work done.

The algebraic approach has limited use, whereas the calculus approach is applicable in every situation.

The main advantage of the algebraic approach is that one need not know any calculus to find work done.

The algebraic approach of work done.

When a constant force F acts on a particle, and the particle moves through a displacement S, then the force is said to do work W on the particle

The scalar product of F and S can be evaluated as

Here, F is the magnitude of force F,

S is the magnitude of displacement S and

is the smaller angle between F & S.

= magnitude of force × component of displacement along the direction of the force.

A body of mass m is sliding down on a smooth inclined plane of inclination . If L is the length of the inclined plane, then work done by the gravitational force is

Here is the component of the force of gravity along with displacement L.

Work done in pulling the bob of mass m of a simple pendulum of length L through an angle to the vertical using horizontal external force F. 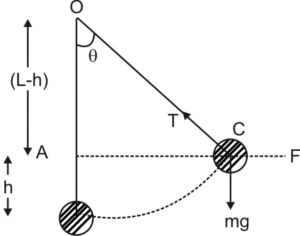 Work done by the gravitational force

The area enclosed by the F-S curve and displacement axis gives the amount of work done by the force. 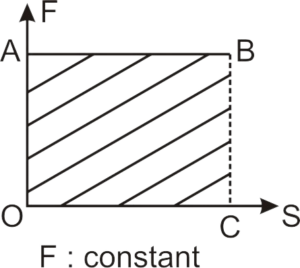 Work done by a variable force

For small displacement (dx), the work done will be the area of the strip of width dx.

E.g., Work done by the spring force graphically (without calculus)

If x is the displacement of the free end of the spring from its equilibrium position, then the spring force can be written as

Here k is the spring constant. 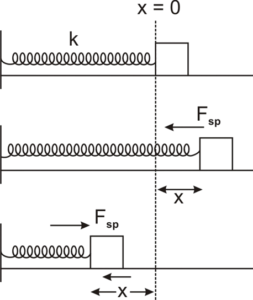 The negative sign signifies that the force always opposes the expansion (x > 0) and compression (x < 0) of the spring. In other words, the force tends to restore the system to its equilibrium position. 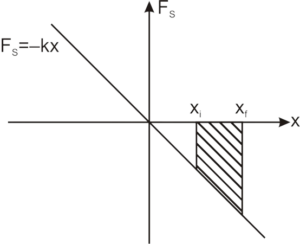 So, the area enclosed under vs x curve and displacement axis.

But area enclosed below the x-axis is said to be negative.

Work done by the spring .

When the magnitude and direction of a force vary in three dimensions, it can be expressed as a function of the position vector F(r) or in terms of coordinates F(x, y, z). The work done by such a force in an infinitesimal displacement dS is 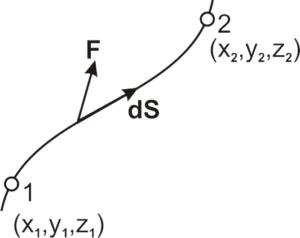 Ans. Work done by force F can be written in the form-

Work done by the spring force (with calculus)

Ex.: A block of mass m = 250 gram. Slides down an inclined plane of inclination 37o with a uniform speed. Find the work done by the friction as the block slides through 1.0 m.

Sol.: In our question, the body is sliding down with uniform speed. Therefore, the net force acting on the block along the incline will be zero.